Sydney’s fine-dining chefs are like A-list celebrities, turning heads with their restaurant concepts and culinary prowess. Whether you’re in a restaurant with views of Sydney Harbour, or hidden French bistros and omakase joints, be prepared for a culinary adventure.

There are chefs, and then there’s Peter Gilmore, who oversees the award-winning dining room at Quay, with stellar views over the Sydney Opera House and Harbour Bridge. You can expect similarly dazzling views (and food) at Bennelong (you’re eating in the Opera House), Aria and Cafe Sydney. It’s hard to say what’s better – the food or the views.

Wood-fired meats, seafood and a world-class wine list star on the menu at nearby Rockpool Bar & Grill, set inside a glorious Art Deco building that’s all green marble and high ceilings. Meanwhile, Sydney institution Tetsuya’s French-Japanese degustation menu never fails to impress. Plus, the setting is like stepping into a Zen garden… in the middle of the city.

To glimpse a different side of Sydney, go east to Icebergs Dining Room and Bar, where elevated Italian fare is only outshone by the panorama over Bondi Beach and its oh-so-Instagrammable ocean pool. The outlook is just as good at LuMi in Pyrmont, where you can watch yachts bobbing on the harbour while enjoying a parade of delicious bites.

Each year the Good Food Guide awards ‘Chef’s Hats’ (similar to Michelin stars) to Australia’s top restaurants; three hats being the top award. Among those at the pinnacle in 2022 were Quay, Tetsuya’s, Sixpenny – an elegant diner in the Inner West that spotlights local in food and décor – and Oncore by Clare Smyth, sitting pretty at the top of the gleaming Crown Towers Sydney in Barangaroo. Get set for the culinary ride of your life – the three-Michelin-starred chef knows how to prepare a decadent degustation.

A cache of other impressive restaurants dot the floors of the Crown Towers Sydney, including an outlet of Nobu (think Japanese-Peruvian fusion), and Ross and Sunny Lusted’s Woodcut. If you like a little tableside dining drama, order the pesto at a’Mare, where dapper waiters make the dish while you watch on, before delivering plates of pasta.

Speaking of wood, there’s no gas or electricity used in cooking at Surry Hills’ Firedoor, where everything is prepared over coals, allowing the ingredients to speak for themselves. Fire is also a reoccurring theme at Porteno, an achingly cool Argentinian grill.

Chippendale’s Automata serves bold food in an industrial dining room, while Potts Point is home to Yellow, Sydney's first fine-dining vegetarian and vegan restaurant, pairing creative dishes with an excellent wine list. It’s owned by the team behind city faves Bentley Restaurant and Bar, and Monopole, both of which have a similar focus on building an exceptional cellar.

In the CBD, follow the queues down a pedestrian-only laneway to reach Mr Wong, where contemporary Australian-Cantonese cuisine and cool cocktails do a brisk trade. Sydney's Bay Nine Omakase (chef’s choice) dining scene is also big business. Think intimate spaces with room for just a handful of patrons who look on where a sushi master moulds delicious bites. Do whatever it takes to get into the 11-seater Kuon Omakase and sister Tempura Kuon, or settle in for a multi-course feast at Chaco Bar.

Seriously sophisticated dining covers all pockets of the city. The Hamptons-inspired Chiswick in Woollahra is hemmed by manicured gardens and serves up produce-driven fare using ingredients from the kitchen garden and owner-chef Matt Moran’s farm in regional NSW. Nearby, the historic Finger Wharf in Woolloomooloo delivers a taste of Naples at Il Pontile. And in the Inner East suburb of Paddington, sustainable seafood eatery Saint Peter’s philosophy is to use every part of the fish, from scales to eyeballs. In Barangaroo, Cirrus also specialises in seafood, from Murray cod to Skull Island prawns.

Embrace old-school glamour at Hubert, a classic French restaurant with a dining room decked out in wood and velvet, set belowground in the city centre. There’s live jazz, and the steak frites is oh la la! In Chippendale, Ester was a pioneer in cooking over an open fire, and still turns out steaming platters of coal-roasted oysters and perfect steaks. Don’t miss the Sunday roast. This sustainable seafood restaurant in Paddington has an impressive list of awards. 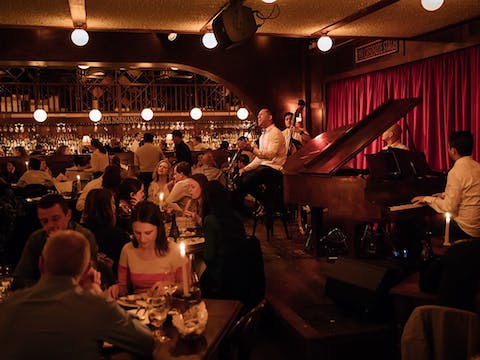 An elegant French restaurant hidden below ground in the Sydney CBD, Hubert is reminiscent of post-war Paris. Nestled in the back streets of Surry Hills in a heritage building, Firedoor has become renowned for its custom-made…