Sparkling blue ocean, fun eateries and a laid-back beach lifestyle sums up Sydney’s world-famous Bondi. Go for a swim in an iconic ocean pool, enjoy a yoga class overlooking the ocean and sip a fruity cocktail at a beachside bar. There’s also quality surf, bustling farmer's markets and a dramatic clifftop walk in this spectacular suburb that blends seaside life with city charms.

Professional lifesavers patrol the huge expanse of golden beach all year and even have a reality TV show, Bondi Rescue. With a temperate climate, locals and visitors swim year-round and surfers can be spotted enjoying the waves from dawn to dusk. A fun way to experience Bondi is to learn to surf at a surf school such as Let’s Go Surfing.

Bondi is home to one of the oldest surf lifesaving clubs in the world and one of Australia’s oldest swimming clubs, the iconic Bondi Icebergs, located at the southern end of the beach. You can swim laps with the Icebergs, the nickname given to the regulars brave enough to go swimming in winter in the Bondi Baths.

The Bondi to Coogee Coastal Walk is a memorable way to appreciate the beauty of the area. The picturesque 6km track is carved into sandstone cliffs and offers uninterrupted views of the ocean, passing Tamarama Beach and Bronte Beach, before finishing in beautiful Coogee. From May to November, it’s also a great vantage point to spot whales during their annual migration.

Sculpture by the Sea is the world’s biggest annual free outdoor sculpture exhibition, showcasing the works of more than 100 Australian and international artists. Throughout October and November, the sculptures are dotted along the Bondi to Coogee Coastal Walk, set amongst the natural surrounds. The vibrant events calendar is full of more festivals, markets and activities.

Sculpture by the Sea, Bondi

Bondi is abuzz with beachside cafes, hip bars and quality restaurants. Speedos in trendy North Bondi has water views and was recently named the most Instagrammable cafe in the world for its spectacular breakfasts. Other top spots for brunch include Porch and Parlour, Harry’s Bondi and Brown Sugar.

Hall Street and Bondi Beach’s other backstreets are dotted with delightful cafes, cool bars and casual restaurants. Enjoy a drink at Rosenbaum & Fuller, Neighbourhood or Bondi Hardware; and then grab dinner at Elva, Eden, Totti’s or Lox Stock & Barrel. You can also head to beachside Campbell Parade for takeaway fish ‘n’ chips and savour them on the grassy knoll of North Bondi.

There are plenty of places to stay in Bondi, from youth hostels to apartments, beach houses and beachside hotels. QT Bondi offers a boutique, high-end stay. Hotel Ravesis is right on Campbell Parade above a popular bar or opt for a self-contained stay at the Adina Apartment Hotel on Hall Street.

Bondi’s proximity to the CBD is one of its main attractions, combining an urban lifestyle with a spectacular beach. It’s only 30 mins by public transport from Town Hall station in the city centre, so is easily accessible to everyone. Catch the train to Bondi Junction and then hop on a bus or catch a bus that goes from the CBD straight to the beach. 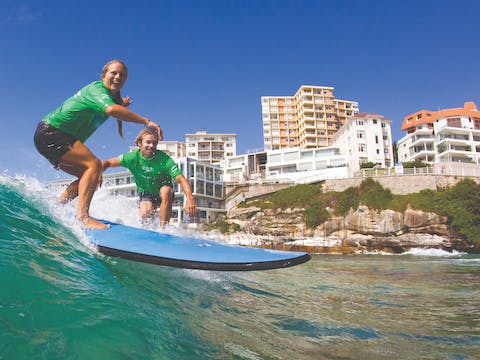 The Bondi Farmers Market is held every Saturday at Bondi Beach Public School. Located at the southern end of Bondi Beach, Bondi Icebergs Club is an international landmark.