Sydney is surrounded by water, so it makes sense that there’s more than one way to enjoy it. If surfing and swimming aren’t your thing, you can still have a great day out without getting wet. Rent a kayak, grab a pair of oars and explore spectacular Sydney Harbour, the winding rivers and the magnificent ocean that edges this fair city.

A wonderful way to experience everything Sydney’s waterways have to offer is with a kayaking tour. Ozpaddle Sydney will take you right up to the Sydney Opera House and under the Sydney Harbour Bridge while Sydney Harbour Kayaks have a four-hour Kayak Eco Tour that explores Middle Harbour alongside the Garigal National Park.

From Rose Bay, kayakers can cling to the shallow waters along the shoreline, stopping at the string of beaches between Rose Bay Beach and Camp Cove, or make tracks for Shark Island. Rose Bay Aquatic Hire provide single and double kayaks for rent.

For a more urban setting, head to Rozelle Bay or Blackwattle Bay to explore the waters of the inner west. Annandale Boat Hire can organise a kayak for you, and Paddle Pirates do tours that take you all the way to Goat Island and back.

One of the best ways to discover Lane Cove National Park is by paddling up the gentle Lane Cove River. There are many picnic spots along the way, and rentals can be picked up from Lane Cove Boatshed.

Just a few metres from where you step off the ferry at Manly Wharf, you can pick up a single or double kayak at Manly Kayak Centre. After a quick briefing from the team, paddle around the headland towards gorgeous harbour beaches Collins Flat, Store Beach or the beach at the Q Station.

A little further afield but just as beautiful as Sydney Harbour is sparkling Pittwater in the Ku-ring-gai Chase National Park. Spend a day discovering this Northern Beaches basin and its many secret beaches with Pittwater Kayak Tours.

A great spot for families is Narrabeen Lagoon, the largest estuary system in the Northern Beaches. If you don’t have your own, stop into Prokayaks to pick up gear.

The meandering Hawkesbury River is another waterside haven just two hours from Sydney and is made for kayaking. Grab everything you need from Hawkesbury River Kayaks in Brooklyn and set off – if you have a few hours to spare, try circumnavigating Dangar Island.

Down south, explore the Royal National Park from the water by hiring a kayak from Audley Boatshed and taking a paddle up Kangaroo Creek. Nearby, the Port Hacking waterway is a paddler’s paradise, with various routes to explore among beaches, bays, mangroves and secluded picnic spots. The best jumping off point is the town of Bundeena, and Bundeena Kayaks can get you set up for the day.

Extending from the Southern Highlands all the way to the Hawkesbury, the Nepean River is a massive waterway. The best section to explore by kayak is the 25-kilometre stretch between Penrith and the Junction Reserve, which is tide-free. Horizon Line offers rentals, as well as guided river tours.

For thrill seekers who know what they’re doing, the Olympic-scale kayaking at Penrith Whitewater Stadium is just the ticket. You’ll navigate rapids on the 2000 Sydney Olympics course as if you’re on a wild river - 14,000 litres of water a second rushing through the moveable obstacle course.

Whether you're a beginner or experienced, you'll find locations to suit your skill level. If you’re a novice, there are schools and boat hire centres that provide lessons and equipment to get you on the water in no time. Remember to always to wear a life jack and follow the laws of the water. Come on an unforgettable kayak adventure on Sydney's magnificent Harbour. Paddle past all the great Sydney icons before… 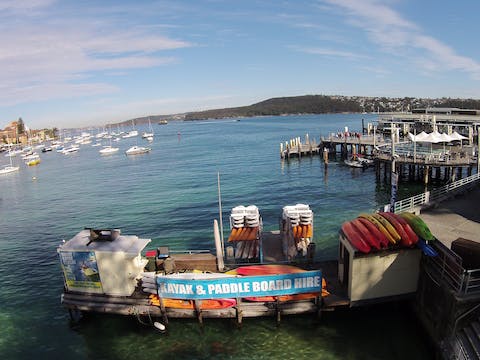