David is senior concierge at the five-star Park Hyatt Sydney hotel, which occupies a prime waterfront position near the Harbour Bridge. 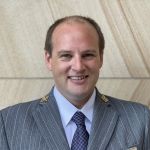 David is senior concierge at the five-star Park Hyatt Sydney hotel, which occupies a prime waterfront position near the Harbour Bridge. Hotel guests trust David to recommend the city’s best experiences, from extravagant restaurants to hidden neighbourhoods. These are his picks.

Aside from the location, what sets it apart for me is the people who work here. The staff are, from top to bottom, genuine and caring. Everyone’s friendly and approachable. There are staff that have been here for 15 or 20 years, which says a lot, I think.

The Dining Room at Park Hyatt Sydney, The Rocks

The Park Hyatt is close to amazing venues for food and drink. Where do you recommend for a special occasion?

It has to be Quay, which I think is the pinnacle of fine dining in Sydney. What makes it special is the combination of Opera House views, spectacular food, wonderful ambience and flawless service. I’ve never had a bad meal there. The wine pairings are a treat, too.

How about a Sydney food venue that’s low-key and off the beaten track?

The place my family has been frequenting lately is Wings and Tins in Darlinghurst. It’s along an alleyway, up a flight of stairs. Chicken wings and cans of beer are pretty much all they serve – I mean, they do chips and a few other bits and pieces, but it’s really all about the wings and the tins. It’s fun, funky and hidden away, with great music and a really chilled atmosphere.

Wings and Tins in Darlinghurst

Where should we go for a fancy drink with a view?

Check out The Theatre Bar at the End of the Wharf, which is part of the Sydney Theatre Company. My favourite time to visit is late afternoon, when you can watch the ferries carrying people home from work and all the other boats glowing in the setting sun.

Can you recommend a small-boat cruise operator for visitors who want to get out on the water themselves?

I generally recommend either Sydney Luxury Cruise or My Sydney Boat, both of which are well established. They offer bespoke pick-up services, so we can arrange for them to pick up guests in front of the hotel. They’ll take you off to secluded little beaches around the harbour. It’s a very special experience.

I have two, actually. Whenever I have a weekend off, I head to Marrickville in the inner west. It’s really up-and-coming. Traditionally, it was known mainly for its authentic Vietnamese cuisine, but nowadays there are lots of small breweries there, including my favourite, Sauce Brewing Co. It’s also home to the Factory Theatre, a great live-music venue.

The second is very close to The Rocks: it’s the area known as Millers Point, which incorporates Walsh Bay. Usually, The Rocks is chock-a-block with visitors, but if you walk under the Harbour Bridge you’ll find this lovely quiet neighbourhood with small restaurants, old pubs like the Lord Nelson and historic homes. Down by the water, at Walsh Bay, is the Sydney Theatre Company and the Sydney Dance Company.

You’ve name-checked two big cultural attractions there. Where else can visitors catch a performance?

A lot of people don’t realise how much goes on at the Sydney Opera House. Our guests will often ask, ‘What opera is on?’ and we say, ‘It’s not just the opera!’ There are seven or eight different venues within the building, and you can always catch something out-of-the-ordinary.

15 of the best bars in Sydney for a first date

Sunrise in Sydney: Six sweet spots to watch it

Five of the newest hotels in Sydney to book now