The Rocks is a delicious part of Sydney. It has everything from Australia’s oldest pubs to contemporary cuisine and fine dining by the water, all set within a historic precinct. As an added bonus, you can also enjoy spectacular views of the World Heritage-listed Sydney Opera House as you drink and dine.

The sandstone-quarried heart of The Rocks makes for a stunning restaurant setting. Sake Restaurant and Bar is the spot for contemporary Japanese, wander down the narrow laneways to Tayim for modern Middle Eastern and search out a former underground opium den that’s now The Doss House, a stylish whisky bar. Established in 1988, Fish at The Rocks is the ideal spot for a long seafood-rich lunch, surrounded by maritime art.

The Doss House, The Rocks

Well-known hotel brands offer more than just rooms, they also house great restaurants and fantastic bars. Enjoy cocktails and stunning harbour views at Blu Bar on 36, perched on the Shangri-La Sydney’s 36th floor. If you want to be right on the water, The Gantry at Pier One Sydney Harbour and The Dining Room at the Park Hyatt Sydney are the top picks.

Pull up a stool at the pubs where Sydney’s original settlers used to drink, like the Fortune of War, The Hero of Waterloo, Lord Nelson Brewery and Hotel Palisade. New ales are now being brewed at Tap Rooms, inside the building that housed Sydney’s longest running colonial hotel in the 1800s, while Malt Shovel Taphouse is a two-storey dining hall covered in Belgian memorabilia serving craft beers. Other local favourites include The Argyle, Orient Hotel, The Glenmore and Australian Hotel. Not sure where to start? Take a walk with Dave’s Pub Tours.

Winner of ‘The Best Bar in Australasia’ in the 2020 World’s Best Bar Awards, there perhaps is no better place in the city to order a cocktail than at the trendy Maybe Sammy. If you’re after frozen margaritas and sombreros, head to the large and loud Tex-Mex bar El Camino Cantina.

La Renaissance is a chic French patisserie in a heritage storefront that’s been turning out the flakiest croissants in town for more than 25 years. Team it with a coffee as you browse The Rocks Markets, which take over the cobblestone streets every Saturday and Sunday. There are food stalls offering everything from Turkish gozleme to Chinese dumplings and smoky South American barbecue.

The best-positioned restaurant in Sydney is fine diner Quay, with uninterrupted harbour views. Walk along the harbour foreshore to Campbell Cove for dining precinct Campbell’s Stores, home to restaurants such as 6HEAD which also look across the water to the Sydney Opera House. 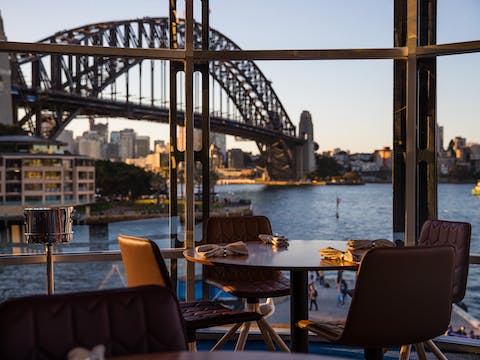 Saké Restaurant and Bar The Rocks serves up award-winning contemporary Japanese in a vibrant and chic restaurant setting. … A menu of beautifully extravagant cocktails has been crafted by lead barman, Andrea Gualdi - winner of Australian Bartender…