Skip to main content
Articles
The secret Sydney spots you might have all to yourself
Wendy Whiteley's Secret Garden, Lavender Bay

The secret Sydney spots you might have all to yourself

Is it still possible to find places in Sydney that seem like your own special secret? We think these nine locales fit the bill very nicely (and quietly).

Poke around this city of 5.4 million people and you can still unearth some remarkable pleasures – gardens, tunnels, beaches, sculptures, treehouses and more – that seem like they’re your own special secret.

Here are nine spots where you might feel as if you have the whole place to yourself.

Wendy Whiteley was best-known as the muse of artist husband Brett Whiteley – until she created her own living masterpiece. This botanical wonderland in picturesque Lavender Bay, overlooking Sydney Harbour, was fashioned from overgrown, unused railway land that had become a dumping ground. Today, there are no signposts to this garden that’s filled with intriguing nooks and crannies, and attracts a huge number of birds. Instead, you find the entrance simply by looking for the colossal Moreton Bay fig tree neighbouring Whiteley’s tower-topped home.

Eveleigh Treehouse is, in fact, two treehouses forged from metal from nearby Eveleigh Works, one of the world’s last remaining industrial blacksmithing workshops. Located in South Eveleigh (a precinct previously known as Australian Technology Park), the artwork was made by Sydney artist Nell and design collective Cave Urban to resemble the area’s native gums. Elevated walkways connect the playful pods that make you feel like you’ve entered a magical forest, free from the stresses and concerns of everyday life. Nearby is Lucky Kwong, the latest restaurant from Nell’s wife, acclaimed chef Kylie Kwong.

It’s a mere slip of a beach with a tiny crescent of sand – but it’s angled towards one of the harbour city’s most spectacular views (of the two unmistakable architectural icons in the hazy distance). Milk Beach is located in ritzy Vaucluse but this multi-million-dollar view is free for all to enjoy. Wander from Nielsen Park’s Shark Beach (climb the stairs tucked away at the western end of the beach) and mosey along the secluded Hermitage Foreshore track to reach this pearler of a beach. On occasions, you’ll have the place completely to yourself.

We don’t know what it is about aquatic ruins but they’re awfully photogenic. Case in point? Paddington Reservoir Gardens, in Sydney’s east, is a heritage-listed reservoir that supplied the city’s water from 1878 until 1899. It became a service station with a park overhead, but today its chambers have been opened up to show its bones. Some worldly types say it now reminds them of Rome’s ancient Baths of Caracalla. It’s a surprisingly peaceful haven given its location on busy Oxford Street.

Squint and the angular raised boardwalk zigzagging through the Badu Mangroves could be a fork of lightning. That’s how surreal it feels to wander through the 65 hectares of riverside wetlands in Bicentennial Park (part of Sydney Olympic Park). While exploring the mangrove forest and coastal saltmarsh on the low-impact trail, look for Australian white ibis, sea eagles and ringtail possums – they’re just some of the animals that live in this fragile ecosystem. It’s oh-so-quiet, too, helping that sense of disconnecting from city life.

How best to commemorate the day that forever changed this island-continent? Three thought-provoking bronze sculptures on Kurnell’s foreshore mark the 250th anniversary of the day of contact between Aboriginal Australians and the crew of the Endeavour. Wander along the rocky foreshore of Kamay Botany Bay National Park to discover the intricately patterned mother whale and her calf, a woven fishing net cast in bronze, and an abstract work representing the ribs of both the Endeavour and a whale, the totem of the Gweagal people.

Stroll through a dim former coal-loading tunnel that’s part of the fascinating Coal Loader complex at Waverton on Sydney’s waterfront. After exploring the 160m-long tunnel (sensor lights will switch help guide you), see how the platform above was transformed into a “green” roof. Examine the Aboriginal bush foods garden and look for the huge rock carving of a whale – a reminder that Cammeraygal people lived here for thousands of years.

Australia’s largest botanic garden, at Mt Annan in south-western Sydney, sprawls over 416 hectares. Specialising in native plants, its collection showcases more than 4000 species. Hit the visitor centre first to find out how to make the most of your visit, which could include dropping by the Banksia Garden, the Bird Hide, the Ironbark Woodland and the Mallee Eucalypts. The beauty of these gardens? They’re so vast that quite often you’ll feel like the only people on earth.

There are only two ways to reach this secluded bush-framed beach tucked into Middle Harbour. You can beg, borrow or steal (joke!) a boat – or take a wander along a track in Garigal National Park in Killarney Heights. It’s totally worth the effort. Wade straight in from the south-facing beach for a lazy float in the crystal-clear waters and feel completely disconnected from the city and the world. Tucked away just off Mona Vale Road in St. Ives, Ku-Ring-Gai Wildflower Garden is one of Sydney's best-kept secrets. … With its scenic harbour views, Collins Flat Beach, just north of Sydney city and nestled between North Head and Little… A beautifully landscaped area overlooking Port Hacking across to Bundeena and the Royal National Park, the area is a… 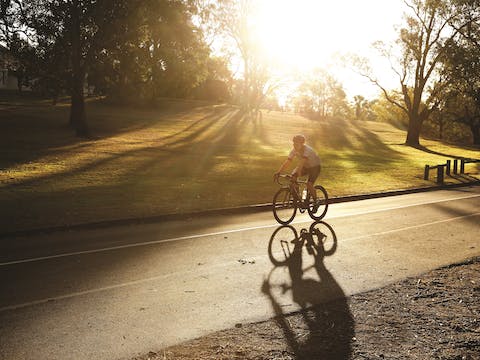 An expert's guide to sailing in Sydney

4 family-friendly adventures in the Penrith region

An awesome day of adventure in Penrith for you & your friends

Connect to Sydney Harbour on one of these Aboriginal tours